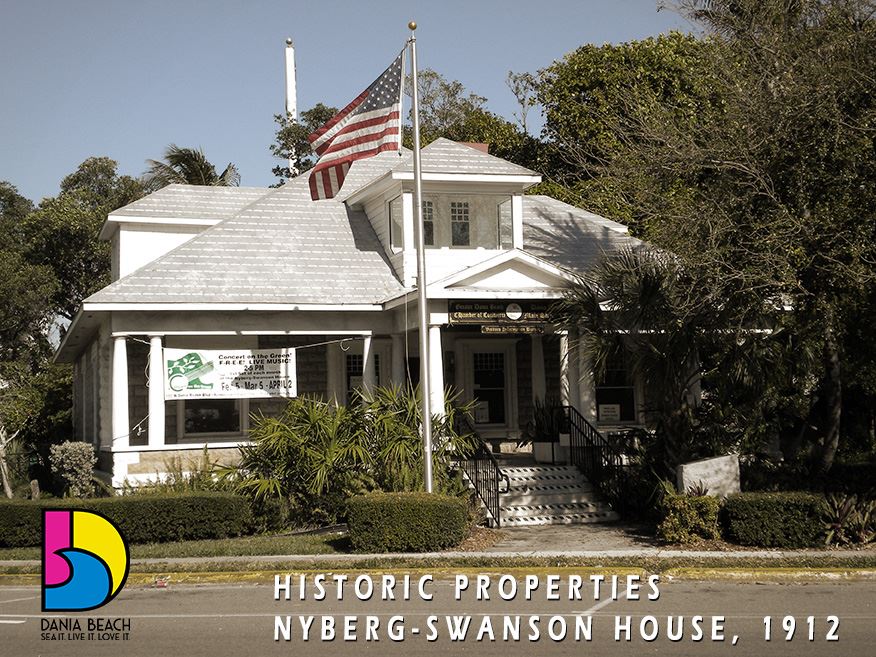 The Nyberg-Swanson House is significant at the local level in the areas of architecture and community planning and development. The house was constructed ca. 1912 for Charles Nelson, a native of Denmark and one of the community’s early residents. Nelson was a developer of property, a farmer and a politician active in the political and social life of the city. In 1917, the dwelling was acquired by Swedish immigrants Carl Gustaf Nyberg and his wife, Emmy. They made their own contributions to the economic and political life of the community. Following the death of her husband in the early 1920’s, Emmy Nyberg married John Swanson, also a native of Sweden. Swanson was a successful farmer and served several terms on the town council during the 1930’s The building is also architecturally significant as an excellent local example of the Colonial Revival architecture style and is the long example in the city of a dwelling constructed of distinctive rough-faced cast concrete block. The building should also be considered as a resource removed from its original location but which is significant primarily for its architectural value, and as the surviving structure most importantly associated with a historic person and event.


The Nyberg-Swanson House was constructed in the Park Hill subdivision, a ten-acre tract that had been acquired about 1905 by Jena and Kjerstine Eskilsen, of Cook County, Illinois, and representatives of the Dania Beach Brotherhood of America. The Eskilsens apparently did not reside in Dania Beach. As early investors and developers of Dania Beach real estate, they opened Addition to Dania Beach ca. 1904 on the north end of Henry Flagler’s Modelo town plan. In August 1911, they sold their ten-acre tract in section three to settlers Charles and Olive Nelson. In May 1912, Charles Nelson hired Civil Engineer Charles Pratt to subdivide the ten acres for residential development. The subdivision lay at the south end of the Dania Beach town plan and west of South Federal Highway. Nelson recorded the plat, named Park Hill, on October 12, 1912. It consisted of nearly 100 building lots and a small central park.

Shortly after platting the subdivision, Nelson constructed the masonry dwellings, which originally faced Chicago Avenue, now called Federal Highway. Immediately to the north lay Denmark Street, now Southeast 2 Street. By 1924, three additional masonry houses had been built in the Park Hill subdivision, none of which remain standing. Nelson had immigrated to the United States from Denmark in 1896. He was among the first Scandinavian settlers in Dania Beach. Between 1904 and 1917 he acquired numerous town lots and farm parcels and operated a truck farm. He was elected to the Dania Beach town council, serving one term (1914-1915). His wife, Olive, helped organize the Dania Beach Civic Improvement Club in 1913 and served as its first secretary. In 1917 the Nelsons sold their home to Carl Gustaf and Emmy Nyberg for $4,700 and apparently left the area.

Carl Gustaf Nyberg, known popularly as “Gust,” arrived in Dania Beach around 1901 and was joined by Emmy in 1907. Between 1907 and 1911, Gust acquired approximately 100 acres of farmland surrounding Dania Beach and town lots in the city from the Florida East Coast Railway’s Model Land Company and from several early Dania Beach settlers. In 1906, he acquired a two-story house at 125 South Federal Highway in lot 16, block 25 of the Modelo town plan, where they resided for approximately a decade. He became a successful farmer and in 1911 leased a fourteen-foot by sixty-foot lot next to the Florida East Coast Railway tracks. On the site, he builds a packing house, which was one of eleven packing houses located on the east side of the tracks between Dania Beach Boulevard and Northwest 2 Street. He served one term (1912-1913) on the Dania Beach town council.

In December 1918, about eighteen months after acquiring the house, Gust was killed when his automobile was struck by a Florida East Coast Railway train at the Stirling Road crossing, just two blocks west of his home. The Ft. Lauderdale Sentinel reported that the car was completely wrecked and Nyberg died within minutes of the crash. Nyberg was survived by his wife and two children, five-year-old Ellen and two-year-old Viola. His estate was appraised at $18,500, including 400 acres of farmland. Emmy continued to operate the truck farm and packing house. About 1921 she married Richard Swanson, a native of Sweden who had immigrated to the United States in 1906 and had been naturalized as a citizen in 1915, about the time of his arrival in Dania Beach.

Richard and Emmy Swanson continued to operate the truck farm and packing house. Swanson developed a partnership with Ira C. Williams and operated the farm and packing house under the name Swanson and Williams Company. During the 1920’s, Richard and Emmy speculated in real estate. About 1923, Emmy and her daughter, Ellen Stoinoff, developed Nyberg Apartments, a two-story masonry building located at 107 North Federal Highway in Dania Beach. Ellen managed the property. Richard Swanson opened a real estate business about 1926. Swanson’s success as a farmer and businessman spilled over into politics. In November 1929 he won a seat on the town council and was re-elected several times, serving one-year terms between 1931 and 1935. During this period, Swanson expanded his family interest with Ira Williams, and by 1940 the partners had added a fruit packing house along the railroad tracks. Emmy prospered from her investments and farm operations. She died in May 1945, leaving an estate of $97,229.27, including $35,000 in cash, bonds, and certificates.

Richard Swanson and his descendants continued to reside in the dwelling until 1975. The building was then adapted for use as a hair styling salon, a purpose it served until the 1990’s when the property was purchased for the construction of a new commercial building. To save the house from destruction, the owner and the City of Dania Beach cooperated to relocate the structure to its present location. The LaPlant-Adair Company of Boynton Beach, of an award from the Florida Trust for Historic Preservation for its part in preserving Sea Gull Cottage in Palm Beach, moved the Nyberg-Swanson House to its present site in 1994. For several years, the City used it as the office of the Fire Chief and his staff. In the late 1990’s a grant from the Florida Bureau of Historic Resources helped pay for the restoration of the exterior; another such grant provided funds for the interior restoration that were completed in July of 2004.

Now listed on the National Register of Historic Places and protected by the City of Dania Beach Beach’s Historic Preservation Ordinance, the house has served at various times as temporary quarters for the City’s Park and Recreation Department, and the City’s Attorney’s Office. In the middle of the year 2000, it became the permanent home of the Greater Dania Beach Chamber of Commerce.


The Nyberg-Swanson House is a good, local example of early 20th century Colonial Revival architecture in Dania Beach and Broward County. The Building, a rectangular structure with a hipped-roof, consists of 1-1/2 stories, with a one-story, fully width veranda supported by classical columns. It is unusual in its use of rusticated concrete block instead of the more familiar brick or weatherboard characteristic of Colonial Revival architecture. Colonial Revival features include wooden Tuscan columns on the veranda and the small pedimented entrance portico. Other defining features are the classical that separates the foyer from the dining room, the oval-shaped, beveled glass light in the main entrance door, and the delicate spindle balusters of the staircase found in the foyer. The Nyberg-Swanson House is the only surviving example of the use of rusticated concrete block construction in the City of Dania Beach. The house is also notable for its large, hipped dormers and for use of metal shingles as a roofing material, which was popular in South Florida during the late 19th and early 20th centuries. The 18+1/1-light windows are another unusual detail, probably derived from the vocabulary of Queen Anne architecture.

* The City of Dania Beach designated this structure as a historic property in 2000 by Ordinance Number 2000-038. Listed in the National Register of Historic Places in 1999; record number 429129